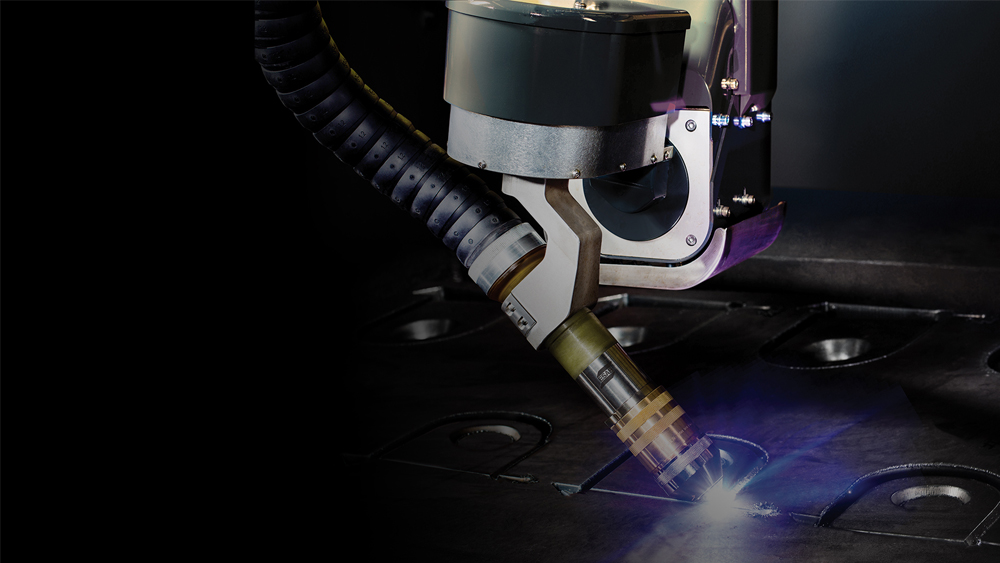 An Introduction to Plasma Arc Cutting

There’s solid, liquid, gas, and then the fourth state of matter, plasma. Plasma is simply a super-heated column of gas that can be used to cut through metals.

Plasma torches work by using compressed air or compressed gasses, such as nitrogen, to ionize and create plasma. Typically, gases are fed into the machine and, after making contact with the electrode, ionize and create more pressure. The gases then push out a stream or column of pure plasma that is hot enough to cut through materials. 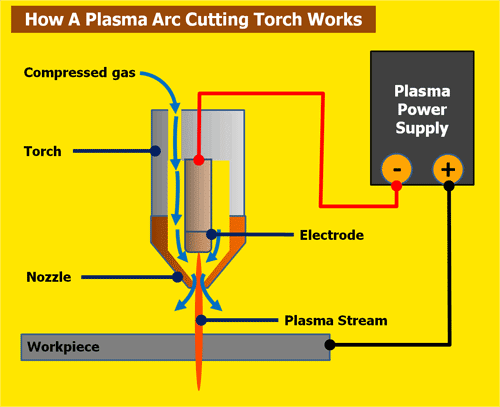 For plasma arc cutting usually, a copper nozzle is used to constrict the gas stream with the pilot arc flowing through it. The pilot arc jumps from an electrode in the torch to the material being cut. This is known as the “transferred arc.” While there are also “‘non-transferred” arcs, these are typically not used for cutting.

Besides the nozzle, the electrode is typically made of copper, as well, but has a metal insert at the point where the arc attaches. Without it, the copper would melt too quickly.

In many cases, a tungsten insert is used in the plasma cutter’s electrode. These can withstand very high temperatures with minimal melting or erosion. Some smaller torches use a ‘pencil’ style electrode made entirely out of tungsten with a sharpened end.

There is a range of advantages to consider with plasma cutting. You can cut through all conductive materials, including sheet metal and non-ferrous metals, and achieve excellent cut quality for thicknesses up to 50 mm. The maximum thickness of cuts is 150 mm.

In addition, plasma arc cutting offers the best, most cost-efficient approach to cutting medium thickness stainless steel and aluminum whether the system is handheld or mounted on a CNC machine. It typically cuts quickly and with minimal slug, providing a smooth cut and narrower kerf.

Since pre-heating is not required, you can save both time and money and also achieve high speeds, particularly on thinner metals. Plasma cutting also offers better performance when it comes to cutting stacked metals.

When working with different shapes, angles, tubes, or channels, plasma cutting provides a more precise and faster way to cut. It’s also easier to use than many other types of cutting systems, producing the need for minimal cleanup. It doesn’t require storage or explosive gases with an open flame, so it’s safer, too.

Since oxygen doesn’t have the same reaction as stainless steel or aluminum, less expensive gases can be used for those metals. These include nitrogen or compressed air, which is often mostly nitrogen.

Other specialty gases are sometimes used for different purposes. Argon gas, for instance, is used with plasma marking, which uses the plasma arc to create surface discoloration. A mixture of argon and hydrogen can be used when cutting thicker, stainless steel, or aluminum. A mix of hydrogen and nitrogen, or methane and nitrogen is another alternative when cutting thinner stainless steel.

Deciding on the mixture to use depends on your needs. Each mixture has different levels of cut quality, as well as varying price points and handling requirements.

Only electrically conductive metal materials can be used during plasma cutting processes. This includes mild steel, stainless steel, and aluminum. Many other metals and alloys are conductive, as well, such as copper, brass, titanium, monel, inconel, cast iron, and others. However, the melting temperatures of some of these metals make them difficult to cut with a good quality edge.

The process of plasma arc cutting is typically viewed as an alternative to oxy-fuel cutting. The process with plasma cutting differs in that it operates using the arc to melt the metal. The oxy-fuel process, on the other hand, uses oxygen to oxidize the metal and the heat from the exothermic reaction to melt the metal.

Generally speaking, oxy-fuel cutting is good for thicker metals and can cut steel from six to 12 inches. Some systems can even cut steel up to 20 inches thick. They also don’t require electricity, which means they’re a good option when you’re in the field cutting. In addition, oxy-fuel cutting torches can do more than cut, but also weld, braze, solder, heat, and gouge.

Laser cutting offers the latest advancements in thermal cutting technology. With it, a laser beam is generated in a resonator cavity of a laser cutting system. When cutting and welding, the laser beam is guided through a beam path system to the cutting head.

With plasma arc cutting, you can only cut metal. However, laser cutting offers you the ability to cut any kind of material. It’s also extremely precise since it harnesses the power of optical light. While capable of cutting in greater detail, lasers are also far more expensive than other industrial cutters, such as plasma.

Should You Choose Plasma Arc Cutting?

When it comes to cutting metal, every system, including plasma arc cutting, comes with advantages and disadvantages. Determining the best fit depends on a number of factors, including the type and thickness of the metal being cut, the location of the job, the budget, and the power resources available.