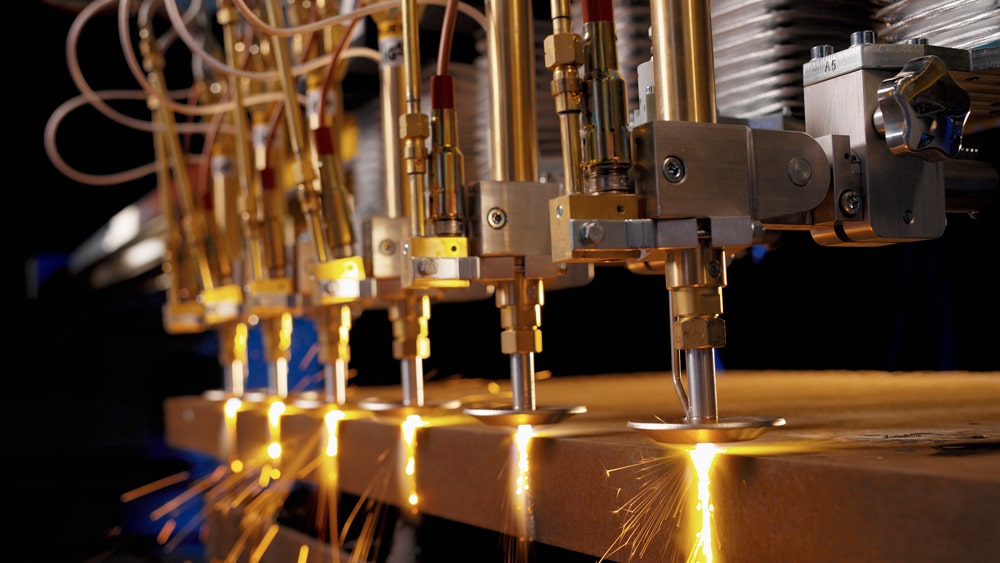 If you’re wondering, “what is oxy-fuel cutting?” the answer is simple. It’s a thermal cutting process that uses pure oxygen and fuel gas to cut through materials, such as plate steel.

Heat from an oxy-fuel cutting torch is used to raise the surface or edge of the steel to approximately 1800 degrees Fahrenheit. Oxygen is then directed to the heated area using a fine, high-pressure stream. The steel begins to oxidize and is blown away to form a cavity. The heat and stream of oxygen move at a consistent speed to cut into the metal.

The actual chemical reaction that takes place during oxy-fuel cutting is sometimes known as “rapid rusting” or “rapid, controlled rusting.” This is simply because the steel is rapidly oxidized.

Oxy-fuel cutting, also called “burning,” “torch cutting,” or “flame cutting,” is widely used in many industrial settings, but only on one metal - steel. It can cut all shapes and sizes of steel in thicknesses from 0.5 mm to 250 mm.

However, only metal with oxides at a lower melting point than the base metal itself can be cut using the process. This includes low carbon, mild steel and some low alloy steels. Otherwise, once the metal oxidizes, either a protective crust begins to form or the material melts and flows away before cutting can take place.

The purity of the oxygen source will not only impact the cutting speed, but also the cut quality. It should be no less than 99.5% pure.

Nozzle design plays a vital role when it comes to ensuring the air stream remains pure. For instance, it protects the oxygen jet from air entrainment, which can lead to air bubbles or air pockets in the metal.

Not all fuel gasses are created equal when it comes to an oxy-fuel cutting system. The most common are propane, acetylene, propylene, liquified petroleum gas, MAPP (methylacetylene-propadiene), and natural gas. Depending on the flame temperature and heat distribution, the type of gas can impact factors like edge quality, pierce time, and cutting speed.

Here are some factors that may influence why you choose a specific fuel gas:

Oxy-fuel cutting is the most cost-efficient process for carbon steel cutting. It can also be combined with plasma cutting or waterjet cutting on the same part. Here are the basics of how it works:

Using preheat flames from an oxy-fuel torch, the steel is heated to its kindling (or ignition) temperature of approximately 1800 degrees Fahrenheit. It’s then ready to react with the oxygen.

Inside the torch, fuel gas is blended with oxygen to create a highly flammable mixture. A nozzle with multiple holes arranged in a circular pattern works to focus the flammable gas mixture through multiple, small jets. The fuel-oxygen mixture ignites outside the nozzle and the preheat flames form just outside the nozzle tip.

During the process, the fuel-to-oxygen ratio can be adjusted. This will help to produce the highest possible temperature in the smallest possible flame. As a result, there’s more control and the heat can be concentrated in a small area on the steel plate surface.

Piercing simply means the initial penetration of the surface to be cut. Once the surface or edge of the plate has reached kindling temperature, an oxygen jet is turned on to begin piercing through the plate. This is called the “cutting oxygen.”

The jet is formed by a single bore in the center of the nozzle. As the stream of cutting oxygen hits the pre-heated steel, the rapid oxidation process begins.

The oxidation process is referred to as an exothermic reaction. In other words, it gives off more heat than it takes to get started. The oxidized steel then forms molten slag, which is blown away by the jet, enabling it to pierce through the material.

The process of piercing can take a fraction of a second or several seconds, depending on the thickness of the plate. During this time, the stream of cutting oxygen is working to push deeper and deeper and penetrate into the plate. As this is happening, the molten slag is being blown out of the pierce hole.

If performed properly, it leads to a small puddle of slag on top of the plate. However, a sloppy approach can produce a large geyser of molten steel.

Once the cutting oxygen stream has made its way through the plate, the torch can begin to move at a constant speed. This forms a continuous cut. The cutting tip and the gas flows set on the regulators control the thickness of the metal being cut.

To keep the exothermic reaction working, the torch keeps the steel heated, just in front of the cut, throughout the process. The heat applied to the plate is therefore continuous, allowing the torch to continue to move forward. At the same time, the molten slag is blown out of the bottom of the plate.

While these are the basic steps of the process, there are many other factors that play a part. These include the speed, cut oxygen pressure, preheat flame adjustment, cutting height, and plate temperature. Each of these can impact the final quality of the cut edge and determine the successfulness of your oxy-fuel cutting operation.

Articles Search My playlist
You are not logged in, please login to see your playlist Login / Signup

How Much Does Waterjet Cutting Cost...

What Is Flame Cutting Process and How Does It Work? 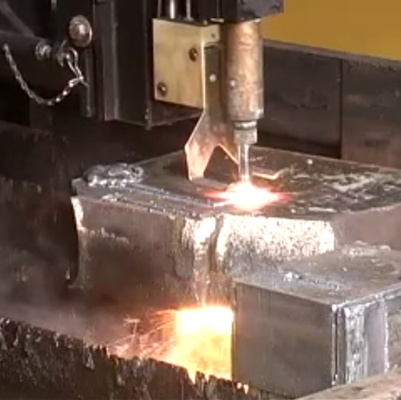 Cutting and Piercing with Cutmaster 58